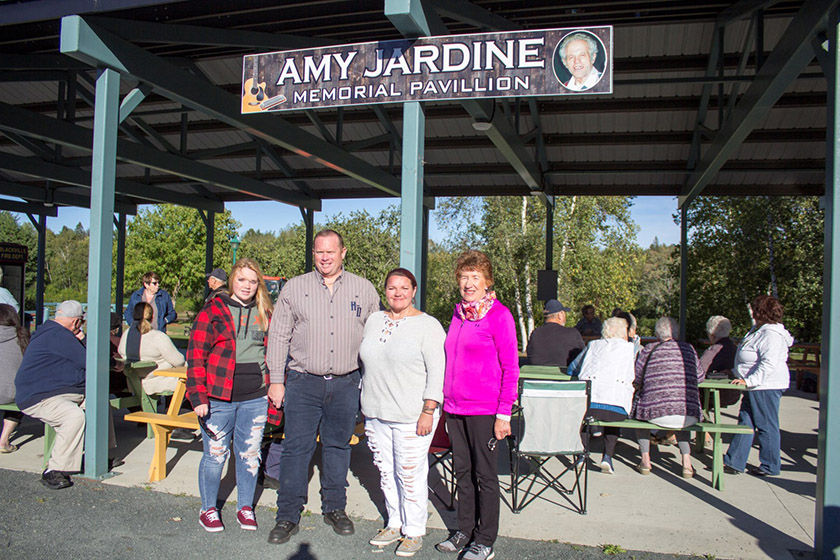 During an afternoon of celebrating the accomplishments and honouring the memory of Amy Jardine, the village of Blackville surprised his family by naming the park pavilion: the Amy Jardine Memorial Pavilion. The twenty-eight hundred square foot pavilion, constructed in 2015, has been the main venue of most community events.

Council members also presented the family with a plaque that will be installed on the “Rock of Fame” at the entrance of the park. It’s inscription: “In appreciation for all of your countless hours of generosity given to our village and surrounding communities”.

The three hour event was well attended and a great success.  Donations were accepted throughout the day, and t-shirts were sold with all proceeds from the event going to the Amy Jardine Memorial Fund. Set up by his family, the fund was created to allow them to donate $50 to each community benefit in his memory, and also to give $500 to two graduates at Blackville School each year.

Local musicians, and friends of Amy’s, performed throughout the day, and the Blackville Firemen’s Club provided a bbq. Facepainting for kids was done by Brenda Donahue Green. Councillor Cindy Underhill spoke on behalf of the village and Bernie Colepaugh was master of ceremonies.

View photos from the event below. Click an image to enlarge.